This despite all the blurb on the cover was actually the last issue of All Star Comics as the "DC Explosion" suddenly became the DC Implosion. At the time this was a comic on my regular reading list in fact I only had and still only have one other edition that of the first revived issue #58. I wasn't then and am not now particularly a fan of the Justice society even though I did like the All Star Squadron that was yet to come when this was published.

I suppose the news that the Justice Society of America is to be revived triggered my interest in this issue given I was buying a pile for the lock-down. It's a pretty average story set on Earth 2 which was destroyed in Crisis but got better then was destroyed by Darkseid if I recall correctly. Multi-dimensional continuity can be be confusing at times in the DC Universe. Part of the fun I suppose.

The "Master Summoner" gets the JSA to undertake a mission to save the earth which was a wee bit misleading as he happens to be the villain of the story and is the one planning our destruction. Of course the JSA prevail. they always do.

One for completists and fans of the JSA. For me a story easily forgotten sadly.

Posted by Howard Fuller at 09:31 No comments:

Every so often I pick up some comics from the nineties a period I skipped for a whole variety of reasons. A lot happened. The industry boomed then collapsed and has taken a long time to recover. I have more than a few of the breakaway  Image titles amongst others but generally have never really caught up on Marvel.

Here we catch up with the Silver Surfer as he returns to earth and as usual finds himself under attack. The military is trigger happy following the Onslaught attack of which I have heard but never read. The world thinks their heroes are dead. This was the period of Heroes Reborn which I have dipped into via the Fantastic Four and frankly find..confusing.

However the attack hounds are called off as the result of an intervention by a group that appears to be the X-Men, it's led by Cyclops anyway. The Surfer looks to the blind artist Alicia Masters for help. He, Norrin Radd cannot remember his own personality. The Surfer is cold, that spark of ,shall we call it "humanity" has gone.

His visit does not help so when I move on to the next available issue (#126 see below) the Surfer goes to Doctor Strange for help. Here he finds the good Doctor failing to master a spell. Even the Sorcerer Supreme has his limits it would seem!

Here he talks to his "old friend" but the bluntness of the soulless Surfer amusingly states:

I recall your word is inviolate. That although you are a human of some arrogance..you are worthy of the Silver Surfers trust.

Not knowing whether to be insulted or flattered the pair journey into the Surfers mind. here they find a weak and beaten Norrin Radd who seemingly dies when they confront an image of Galactus the Doctor realises another mid is at work here and they must depart.

A mystery to be resolved in future issues which I am going to have to pick up after the lock-down. There'll be a big wish list at the end of this!

Posted by Howard Fuller at 10:52 No comments:

The penultimate issue of a 14 part story-line, Worldmerge sees the Earth under attack from the Wraiths who are bringing their world into our solar system. Rom is on the front-line trying to  save humanity and is being hindered by Agent Gyrich who at this period of Marvel history was persecuting the super-hero community.

As they prepare for battle Rom tries to save lives back on a devastated world beginning with an airliner before wandering into a church where people pray, except it's a trap. These are wraiths in human form. They attempt to destroy Rom and of course fail.

With distinctive art from the combo of Ditko & Russel this is a joy to read. It will be worthwhile tracking down all the other 13 other issues when the Covid 19 lock-down is over.

Rom of course was a toy given life in the Marvel Universe though has simply been forgotten in modern times as the franchise is now held by IDW. I haven't read any of the new run and was hoping IDW might be able to reprint collections of Rom but it looks like that will never happen.

I did buy Rom at the beginning but with so many comics and other activities at the time (the height of my clubbing/partying years) there were too many distractions and this title fell by the wayside.

The Marvel version of Rom lasted 75 issues between 1979 and 1986 and is a much over-looked title I consider worth collecting.

Posted by Howard Fuller at 02:07 No comments:

One Marvels "double feature comics this lasted only a few issues before becoming home to Killraven and War of the Worlds.  Anything by Lee & Kirby is usually worth a read and this fight between one of Iron Man's villains and the Inhumans over a sphere of great power in ancient ruins was classic Marvel action. The Mandarin of course does get beaten and Black Bolt buries the nefarious one's rings under a mountain.

Meanwhile Black Widow's more down to earth story about corruption, crime and radicals had less of an appeal only getting a thumbs up because of Gene Colan's excellent art.

These were as far as I can recall the first solo adventures of Black Widow so prices on these are bound to increase with a movie in the pipeline I'm happy with a low grade copy for a low price myself so if you want some of these the grab 'em now fanboy!

Posted by Howard Fuller at 10:58 No comments:

From the Bronze Age of comics comes this short-lived "Giant Size" comic from Marvel featuring not just their version of a Werewolf but guest starring The Frankenstein Monster. With the relaxation of the censorious Comic Code Authority Marvel was able to publish horror comics and produced more than a few memorable series.

Along with The Werewolf, Dracula, and The Mummy were introduced into the Marvel Universe along with new creations such as Son of Satan and Satanna, the Devil's Daughter. Although the boom eventually petered out Marvel did produce a lot of good horror comics including some excellent if short lived balack & white magazines to compete with Warren, publishers of Creepy, Eerie and Vampirella.

In this double sized story the Frankenstein creature thinks he's found a way to become more human as his paths cross with not just Jack Russell but a Millionaire Satanist Danton Vayla leader of the Brotherhood of Baal. Of course all the coincidences involving the involvement of Jack's sister and the random wanderings of a monster could only happen in a comic book, but this is a tale not just worth telling but reading.

Despite his desires and longings old Franky does right by Jack in the end saving his life from the sacrifice that would bring Satan to earth and a mansion ends up burning with the cult in ruins and it's leader dead.

The day is saved but two souls, the monster and the werewolf continue to suffer in a world without answers.

Posted by Howard Fuller at 10:50 No comments: 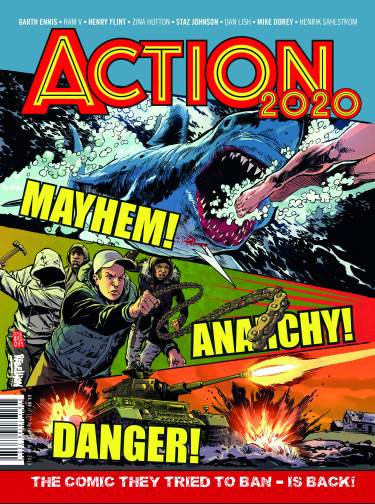 Rebellion, publishers of 2000AD now have the rights to this and virtually the bulk of our non-DC Thomson comics and are now in the process of not just issuing reprints but also giving us new materiel in the form of "Specials". There's seven due over he next year.

This all new edition of Action comes in two editions including one with a facsimile of the banned issue. I chose this as it seemed fun to have a good look at what so outraged the moralists of my youth. Frankly n retrospect and having watched comics grow up with their readers this isn't all that shocking to modern eyes.

In fact the main problem I had was reading some of the text as it's a half size reproduction for cost reasons I suppose but Rebellion ought to remember lots of it's customers are ageing old gits like me!

As for the special itself there are five features four of which are based on the originals, Kids Rule OK which is set after a virus wipes out most adults making it a timely adventure given the current lock-down! Readers can also thrill to Dredger, Hellman and Hook-Jaw, the latter from the age of jaws...

There's one new story or at last I assume it is as I am unfamiliar with the comic and that is Hell Machine which is violent and plain weird.

Of course this is highly recommended.

Due to shut shops please order direct by mail from: https://shop.2000ad.com/ 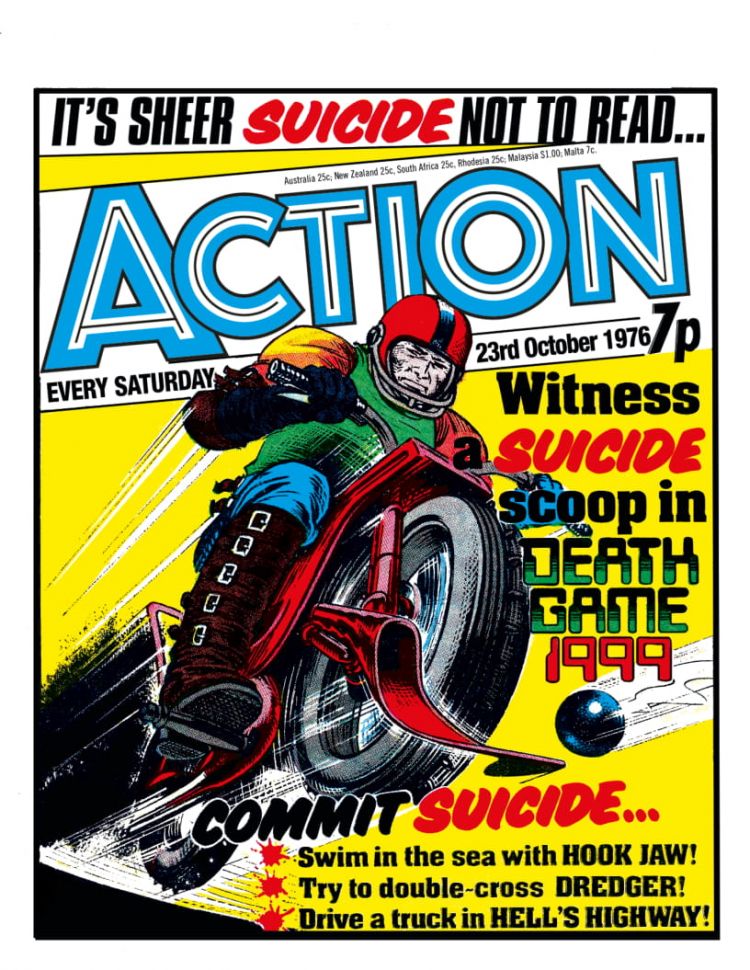 Posted by Howard Fuller at 11:12 No comments: 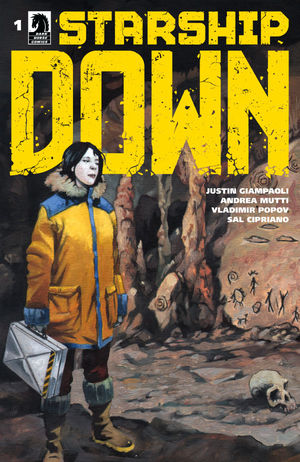 Every so often I dip into the world of ancient aliens that gets broadcast on one of the Freeview Channels. Nothing but speculation. I have never heard so many "Ifs" and Maybe's" in any programme. By adding the word "If" to any find a whole story can be made up. Yes there's a lot of unexplained mysteries around the world and I can quite believe tht some of human history has been lost.

However when it comes to aliens I remain a total sceptic. I don't even believe in UFO's in that what people see or think they see is highly unlikely to be alien. I mean why would an advanced civilisation want to prod someone up the anus with some kind of pole or take a bite out of a cow when there are clubs for the former and Butchers for the latter.

That life exists elsewhere in the universe is highly probable given the almost infinite size of the universe. We just haven't proved it yet. So when stories like Starship Down come along it's a great way to speculate through story telling.

This time they find more than they bargain for during a dig. It's no spoiler to tell you they found a spaceship. buried there. This story is to be about the implications for our socities of such a discovery as the arrogance of the Vatican representative illustrates.

One day we will discover that mankind is not alone in this universe. This is just a story while we wait for the real thing.

Posted by Howard Fuller at 10:04 No comments: