This is one of those comics that I used to have as a child and decided to buy again on a whim and although not a great fan of Iron Man (you can blame Civil War for that!) this was a good story. Tony Stark had his place taken by a rogue LMD (Life Model Decoy) who decided to take over not just the playboy's life but his role as Iron Man.

Stark now out on the street regarded as an impostor has just one chance to regain his own identity. And so the original Iron Man returns in a "Battle Royal " using his old suit. Stark however loses and only the arrival of the Avengers overhearing the impostors threats save the day and in trying to escape the LMD plunges into a boiling vat. His last words being "It's not fair, I won....".

This issue and the preceding one are worth picking up if you come across copies. Great story with great art! Nuff said true believers!

Posted by Howard Fuller at 02:58 No comments:

The Best Defense: A Marvel Comics 5 Issue Event. (Out Now)

Bruce Banner wanders into a deserted town where nobody walks the streets and hide from "him". The good Doctor is dead and his amulet is missing. Just who is responsible and why is everyone so afraid.

Namor seeks unity of the underwater peoples and journeys afar to an exiled race who reject his advances even as Armageddon approaches them all.

The Doctor is wandering a desert talking to his bag. What or who is in there and why? Who is he fighting in this desolate lifeless world?

The Surfer seeks more answers as a train approaches. A solar system, that of Sol is in danger and it will take the might of four unique heroes to save the world from the threat from beyond. A fascinating five part adventure of The Defenders, my favourite team of Marvel heroes.

Be warned each comic is an "oversized" issue so it will cost a little more than usual but each part of the puzzle leads to a crescendo of death, destruction of the hope of salvation. 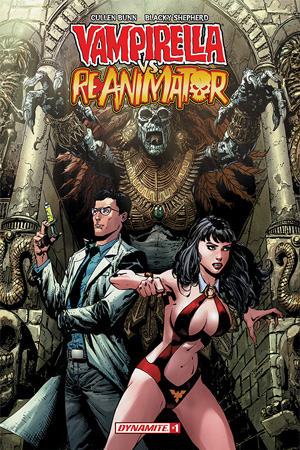 Vampirella returns in yet another horror driven crossover. This time it's one I've heard a lot about but never actually seen. So as far as I can tell Doctor Herbert West is looking for a way to cheat death but his attempts to do result in chaos, mayhem and the living dead. Vampirella meanwhile requires no such introduction. She's our plucky heroine and that my friends is that.

The first issue sets the scene with Dr West raiding a Monastery "somewhere in Mexico" the retrieve some hidden knowledge. as he steals what he wants his undead legions kill everyone in sight as they do.

The story is unusually set in black and white tones with splashes of red for blood (what else) and I rather like the format. It works well with horror which I feel sometimes gets lost in gory colour comics. That's me. Fan of the format. Must be my British upbringing.

Vampirella is fighting Werewolves and is need of a shower. Meanwhile Dr West is awaking an ancient evil....

I like this and have a feeling I've forgotten to order one of the issues (which is a mini-series) and will have to rectify that with my local comic shop after the Christmas break! 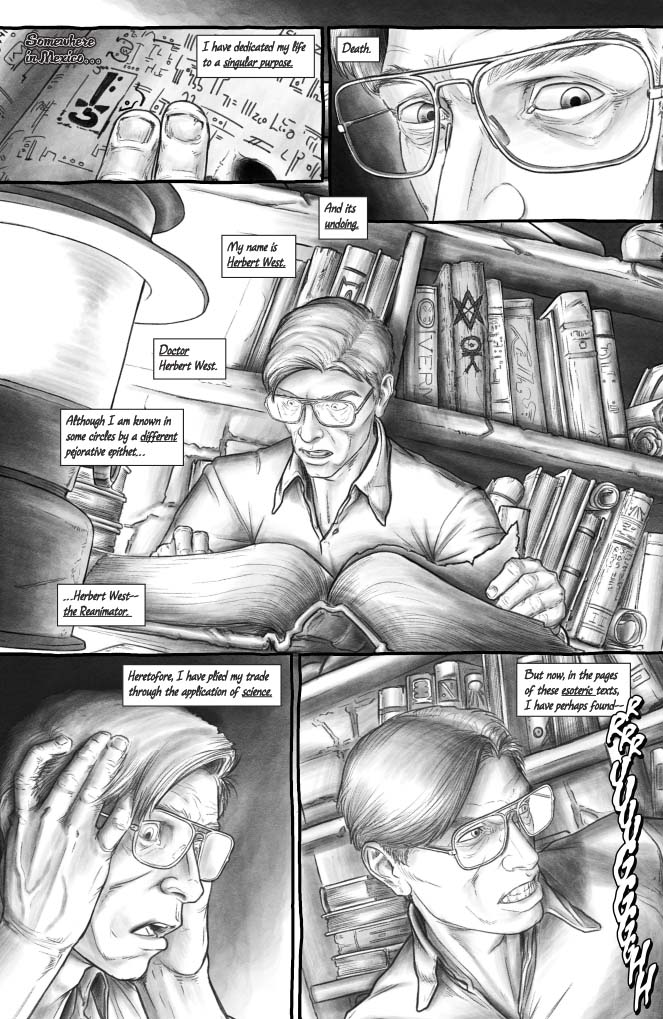 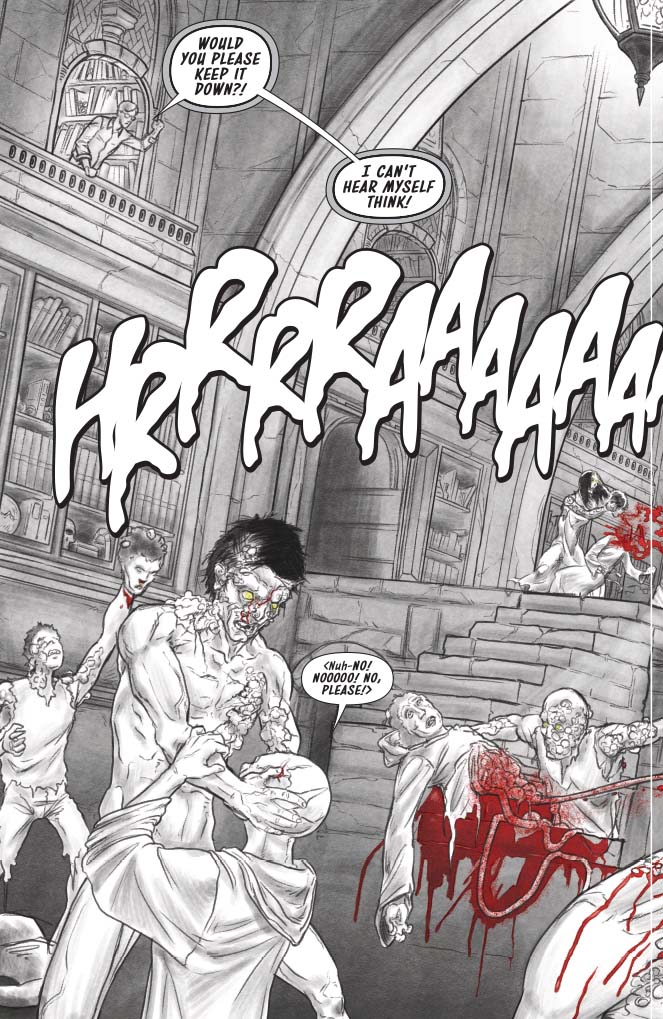 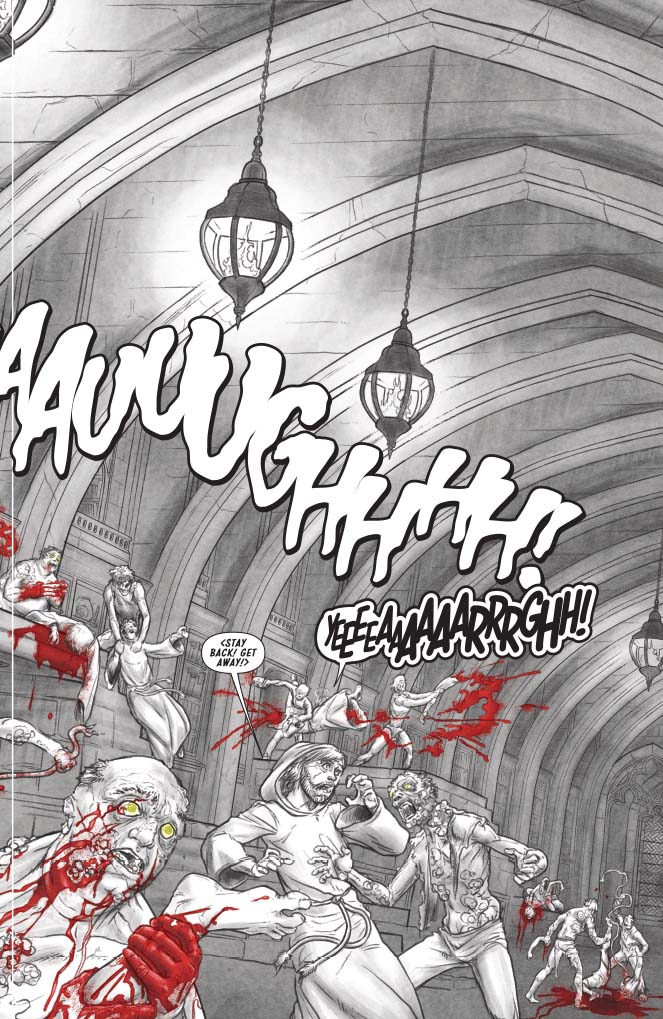 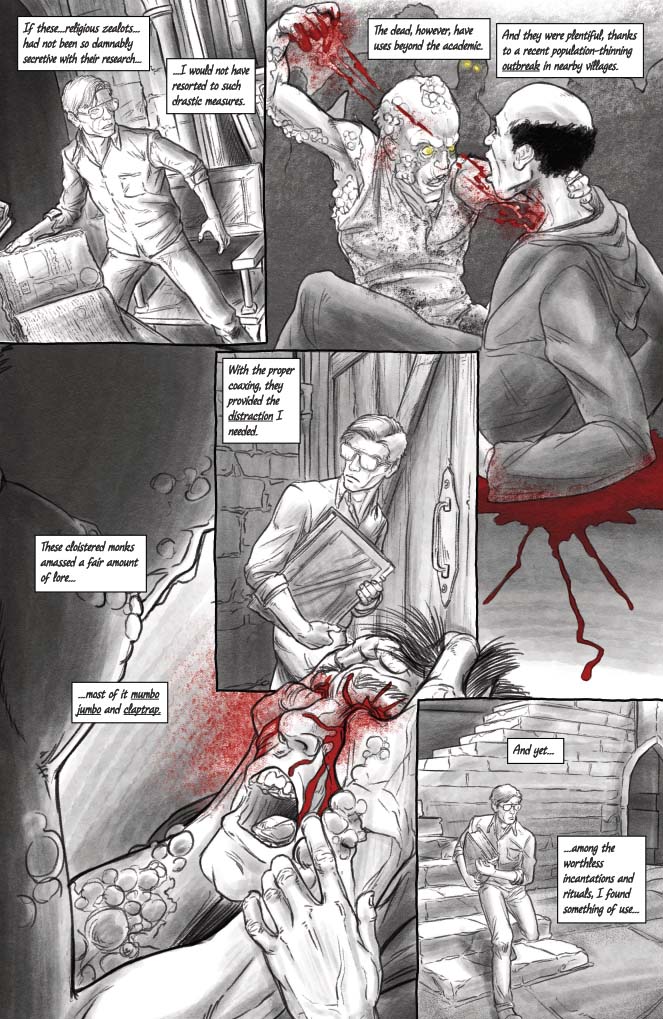 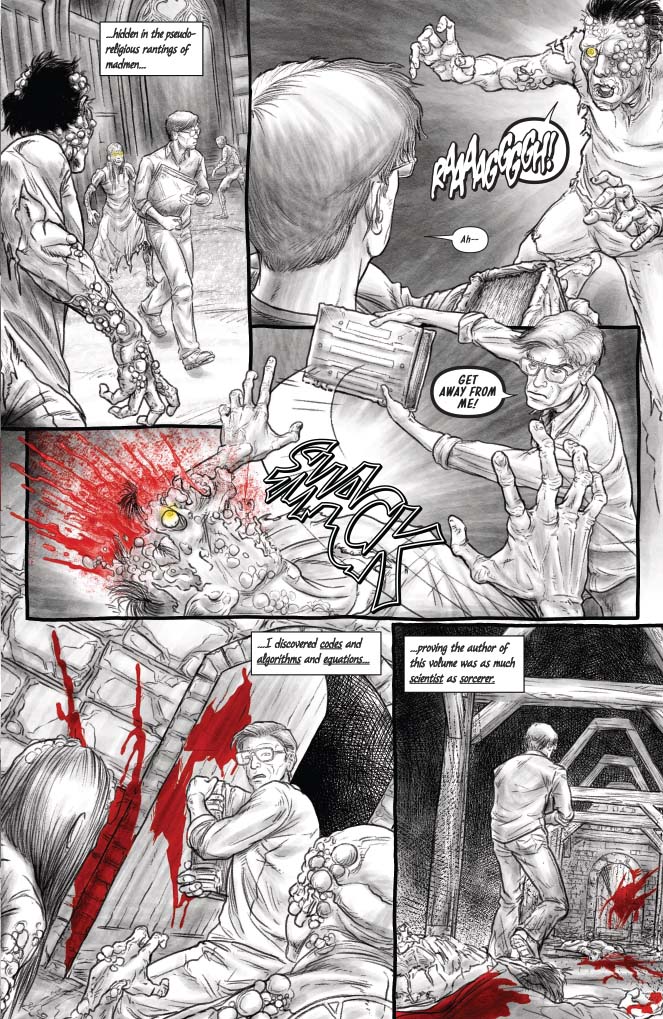 Posted by Howard Fuller at 02:19 No comments:

The Fantastic Four are back and just in time as volume 6 of their comic after a long absence from the Marvel Universe with their 650th anniversary issue and a wedding to rival the first comic wedding way back in the sixties when Reed and Sue tied the knot!

This issue carries a dedication to the late great Stan Lee who launched the Fantastic Four as a rival to DC's Justice League in collaboration with Jack Kirby the artist which became the team that created the cosmic background to the Marvel Universe. The Skrulls, The Watcher, Galactus and the Silver Surfer. The Inhumans, the Black Panther, Him (Warlock) and so much more all started here.

This extra sized book takes us through the bachelor party to the wedding (with a time saving twist) performed by a Rabbi while Ben & Alicia get hitched and then head off to yet another confrontation with Doctor Doom and Galactus who has come to eat the Earth. Again.. despite his promises.

There's also a companion Fantastic Four Wedding Special which takes you out on a very eventful hen night with the ladies.

Weddings are not new in the Fantastic Four! Johnny married Alicia in #300 but his bride turned out to be Skrull.

Nothing of course compares to the original wedding in Fantastic Four Annual #3. Had this as a kid. Available in on of those Marvel Collected Masterworks editions!

Posted by Howard Fuller at 01:11 No comments:

The Freedom Fighters return in their latest incarnation within the DC Universe in an alternate reality where the Nazi's won the war, a frightening enough concept.

Several years later new versions of the Freedom Fighters appear and start fighting back but the Nazi's are prepared.

I could not fault this opening issue of the Freedom Fighters set on Earth X. Both the writing and art are excellent promising a great ride over this twelve issue mini-series. I highluy recommend this comic.

There have been two previous series , the first from the seventies lasted 15 issues (I have the first 8) and didn't think it was that bad but some comics just don't last. The second which I have read and forgotten about was published in 2011. One of these days I'll dig it out for a re-read.

However that might be a wee bit of an overkill as I just purchased the DC Animated film The Ray which is also set on Earth X with the Freedom Fighters. A review of that will appear in due course.

Posted by Howard Fuller at 02:30 No comments: 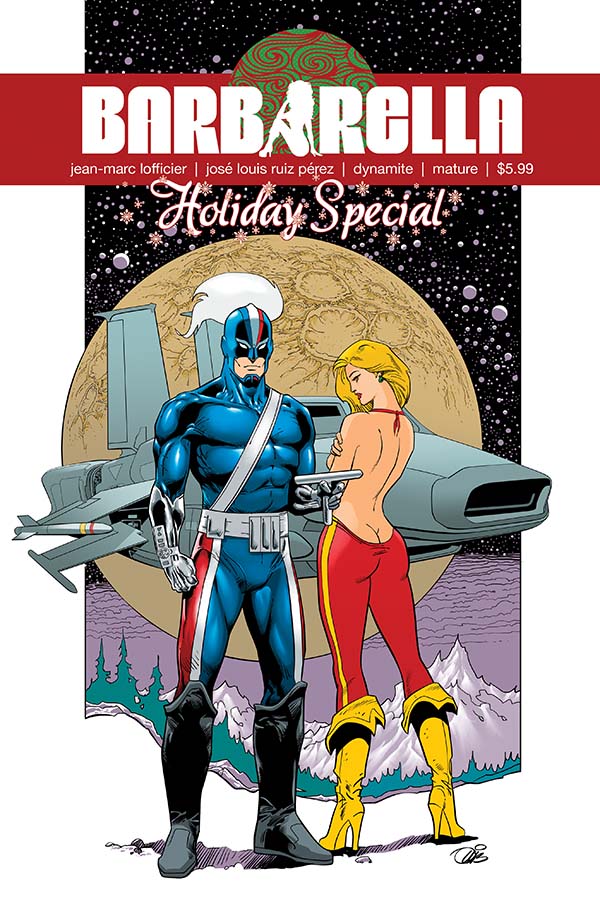 Fancy a bit of an off beat murder mystery for the Christmas holidays then this is for you. On Planet Christmas run by Santa a murder has occurred and who does he call to investigate? Of course Barbarella our sexy adventurer.

It's bad for business see. There's no kids and the planet is outside the laws jurisdiction so it's a place for the rather dodgy class of galactic characters to come to. Santa's killer robots keep the peace! You couldn't make it up, well actually Jean-Marc Lofficier does and a jolly good adventure it is.

Of course Barbarella doesn't "do it alone", . She reminds Santa she's not a detective so he provides her with a rather handsome superhero from the past. Will they catch the culprit in time?

Here's a sneak preview of a rather extra long story! 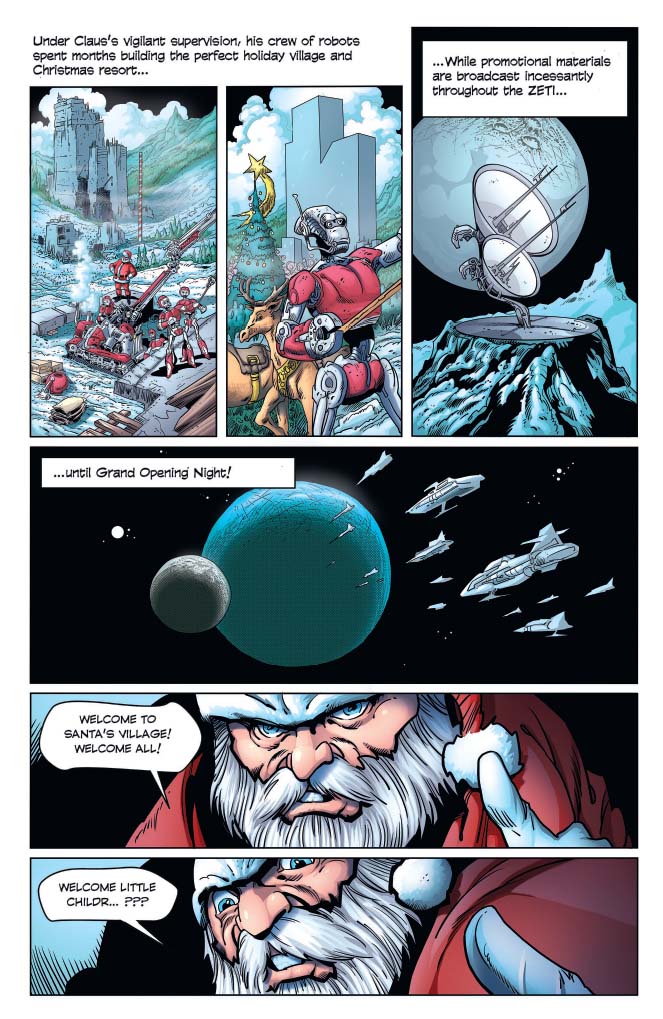 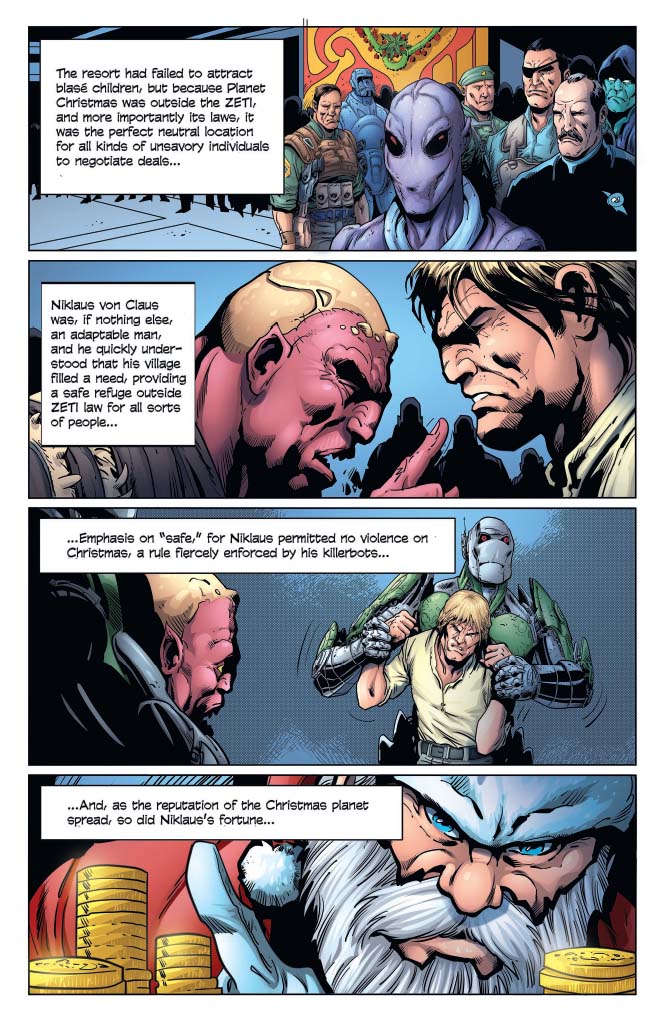 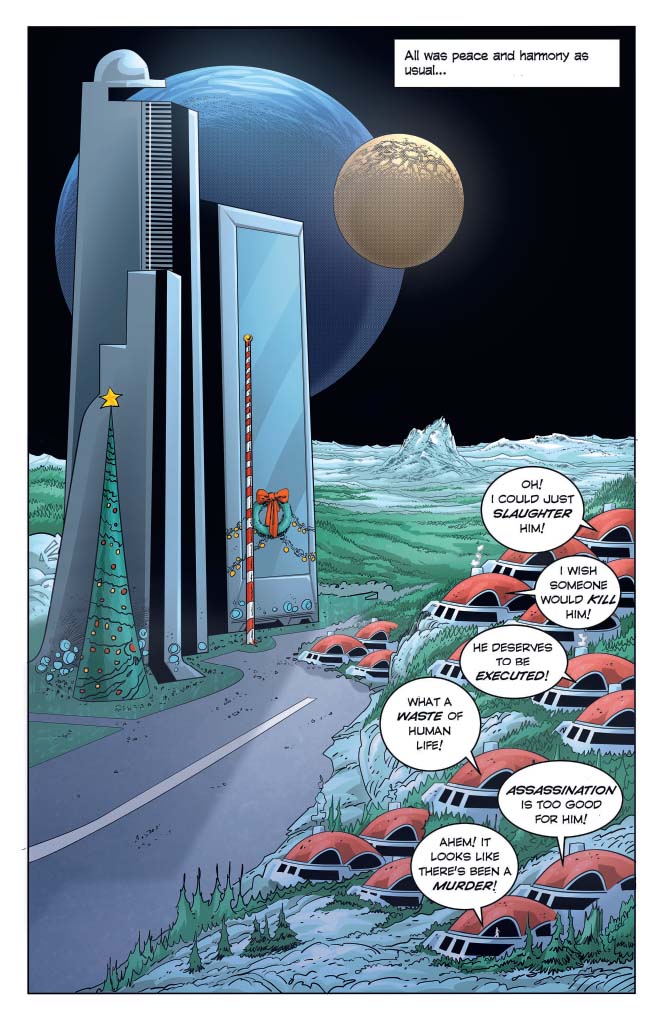 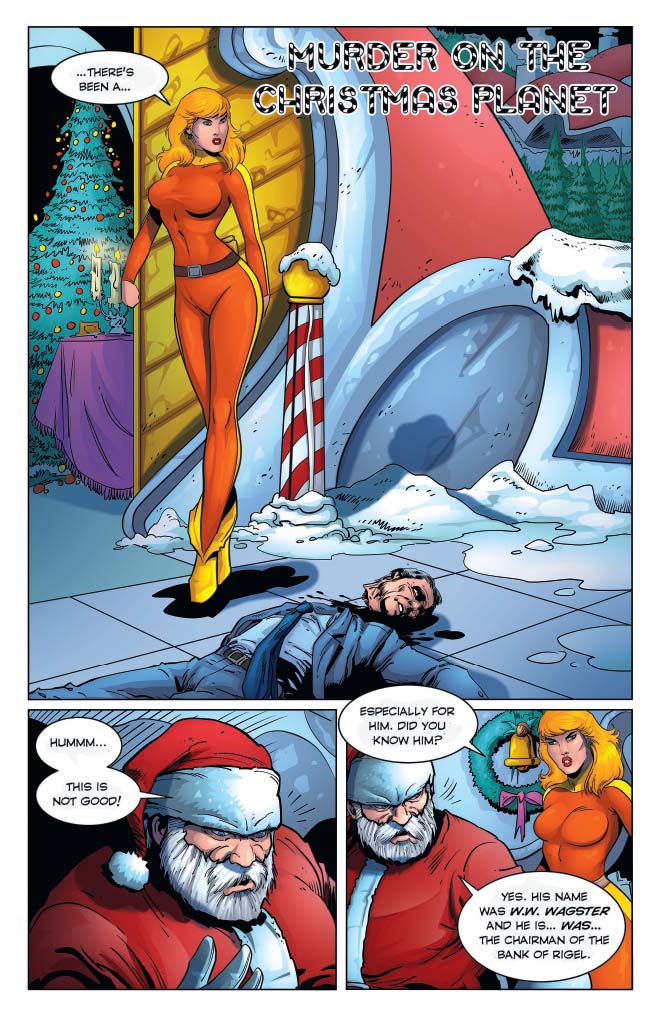 Posted by Howard Fuller at 02:14 No comments:

A Gallery of Boys & Girls British Comic Annuals from the Sixties

The Annual was a mainstay of most boys and girls of my generation and with Christmas upon us I thought I'd do a gallery of Annual covers from the past.

Sadly all these comics except the Beano are long gone. The British comics industry is now quite small but I live in hope tht one day children of all ages will enjoy the adventure and humour that I was privileged to grow up with.

And I'd like to wish you all a very Merry Christmas!

This is one of those comics I picked up on whim, mainly because I have next to no early issues of the X-Men and only ever purchased about 4 when I was a child. Not a great fan at the time. I still only dip into the X-Men occasionally but do quite like the movies.

This issue is pretty standard fare. Sometimes a bit over wordy and contrived and the premise for their capture by Count Nefaria is well, stupid to be honest. And that's on top of an overlong session in the so-called "danger room" designed by Professor Xavier.

The mysterious appearances of other X-men as the gang go around their business leads them to being confronted with a bunch of fairly lame super-villains who get the better of them so in turn each X-Man and X-Woman ends up being transported to the Fortress of Count Nefaria who hopes to enlist him to his cause. Some hope their , eh readers!

We have to wait until the next issue for the conclusion of this story line which is not high on my list of collecting priorities, especially now I'm a pensioner.

For hardcore X-Men fans only.

Posted by Howard Fuller at 02:46 No comments: