Superman as a Nazi?

A rocket from a doomed planet containing a small baby comes to Earth. We all know the story right?

The story changes as a young Kal-EL lands not in Kansas but occupied Sudetenland in 1938.

History then takes a different course........

This is one of the best chapters in Morrison's continuing Multiversity saga and with pencils by Jim Lee not to be missed.. I just knew this would be a "fun" (if disturbing) ride as soon as I turned to the first page.

Hitler sitting on a toilet with his trousers down screaming at his adjutant for disturbing him. Only a British writer could have thought that one up!

The story is as you would expect one based on the victory of the Nazi's and the creation of their nightmare world. Superman or Overman as he is called in this reality stands in the ruins of Washington DC as squadrons of ME 262s fly overhead.

But not is well with the world or Overman to be honest.

There is a Sivana from yet another reality.

There are the Freedom Fighters.

Could have done with more of this. Far too much crammed into such a short, even if over sized comic.

More please DC.
Posted by Howard Fuller at 13:35 No comments:

Luftwaffe 1946 is an alternative history story with a premise that the Second World War lasted one year longer and as such introduces the reader to the possibilities of advanced Nazi science. Many of the aircraft designs used by writer/artist Ted Nomura were already on the drawing board, some even as advanced into model or prototype design.

There's even a story arc about flying saucers, a subject that has been the subject of many an article or documentary. In this alternate world they actually fly.

The stories are produced in an "American manga" style by the small but still continuing Antarctic Press. The aircraft are drawn to a high standard and Nomura even produces "Technical Manuals to accompany his series which lasted well over a hundred issues though with a small print run, so back issues are not that easy to find.

Although the bulk of the action is in Europe there is some in the Japanese theatre as they use advanced technology to fight in the pacific.

The story concentrates on the uses of alternate technology as used by both sides.

Oh and there's a hint of aliens being involved as history resets...

Worth reading if you can track either the single issues or collected editions down. This no War & Peace, but good fun.

If you try to read the letters pages though you will need a magnifying glass. 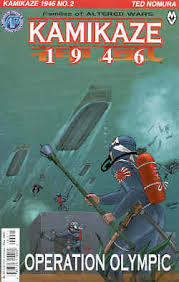 There are spin-offs including Panzer 1946 with a 1,500 ton sporting an 800mm gun powered by four U-boat engines and of course Kamikaze 1946.

Posted by Howard Fuller at 14:50 No comments:

It's that time of month again. I've just sent in my order for new comics arriving in April, so I thought once again I'd share my choices with you! 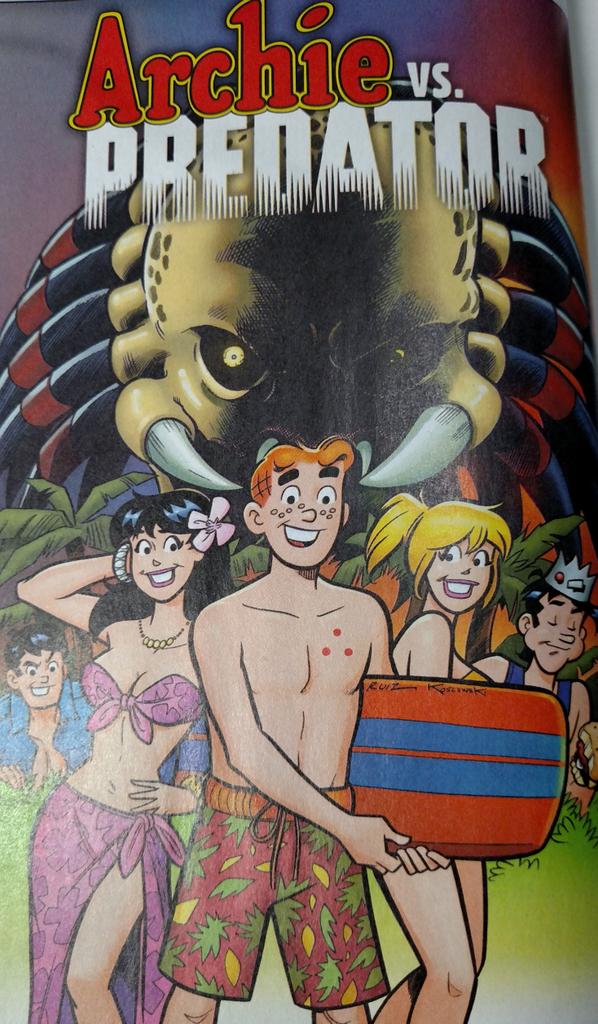 First off is the crossover of the year (so far) which I have already covered here.

A comic not be missed!

Convergence launched with a Zero issue at the end of last month. Now the main series and crossovers begin. Convergence will be weekly over April and May with all DC titles being replaced for the two months by 2 part mini-stories bringing together all the disparate elements of the DC universe.

There are some 40 of these two-parters of which I ordered 30. Some of the "team-ups" are pretty bizarre. There's Supergirl: Matrix. Remember her? She appears with Lady Quark (who I only really recall from Crisis on Infinite Earths back in the eighties plus Ambush Bug.  Hawkman and Hawkgirl turn up in Kamandi's world.

Meanwhile the "classic" Superboy (that's the pre-crisis one who grew up to be Superman) teams up with the Legion of Superheroes to fight the Atomic Knights. They're the chaps who wear medieval armour and ride giant dalmatians. They're from a much earlier time in DC comics history, so just go with the flow.

The old Charlton Comics heroes return in Blue Beetle to save their city, getting "inspiration from an unlikely source". Can't wait. Too many to "preview here" but make your choices. This will be a fun ride for DC fans.

Mark Waid and Barry Kitson's Empire makes an unexpected return at IDW which means it's now had three publishers having started at the now defunct Gorilla Comics and then "completed" at DC. The new story starts "a year later" with Golgoth, the first super-villain to conquer the world questioning the value of continuing his reign. 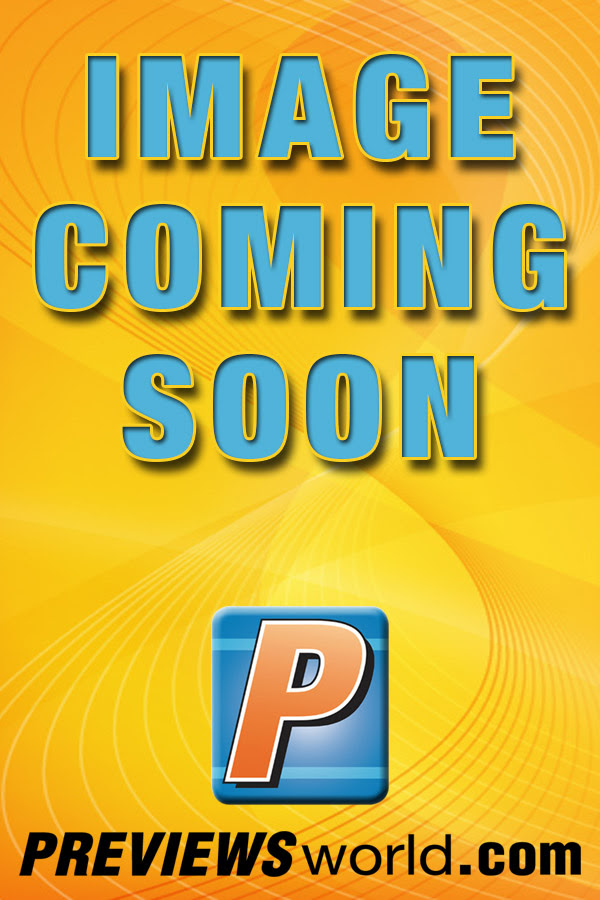 Usefully IDW are also issuing the first volume of the story as a collected edition for those of you who may be new to the comic. Highly recommended. 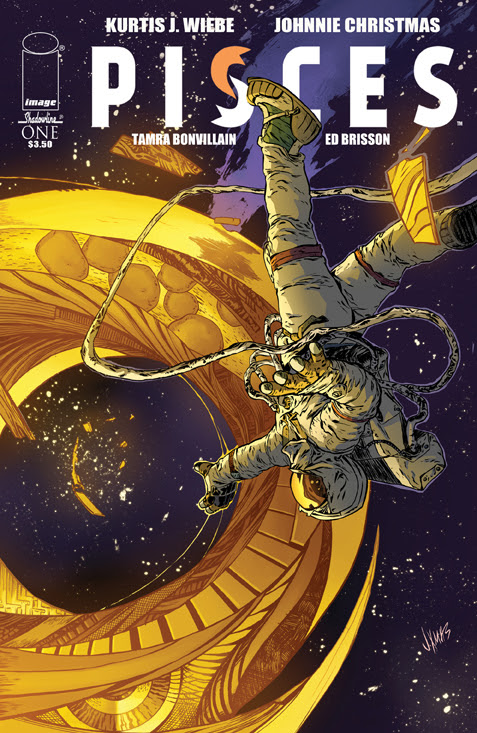 "First Contact" with aliens is always a daunting prospect, so this new series from Image may appeal to Sci-Fi fans.  In Pisces, our war traumatised hero is sent on a secret mission to meet these aliens but with bad visions and a whispering in his head that comes from the stars....

what fate awaits him and mankind.

Worth a peak I thought.

Also listed in Previews was this graphic novel from Arcana studios. It seems to have been release a year ago and so is a re-list. Nevertheless it caught my attention as its a story about terrorism that appears to be extra-terrestrial in origin. 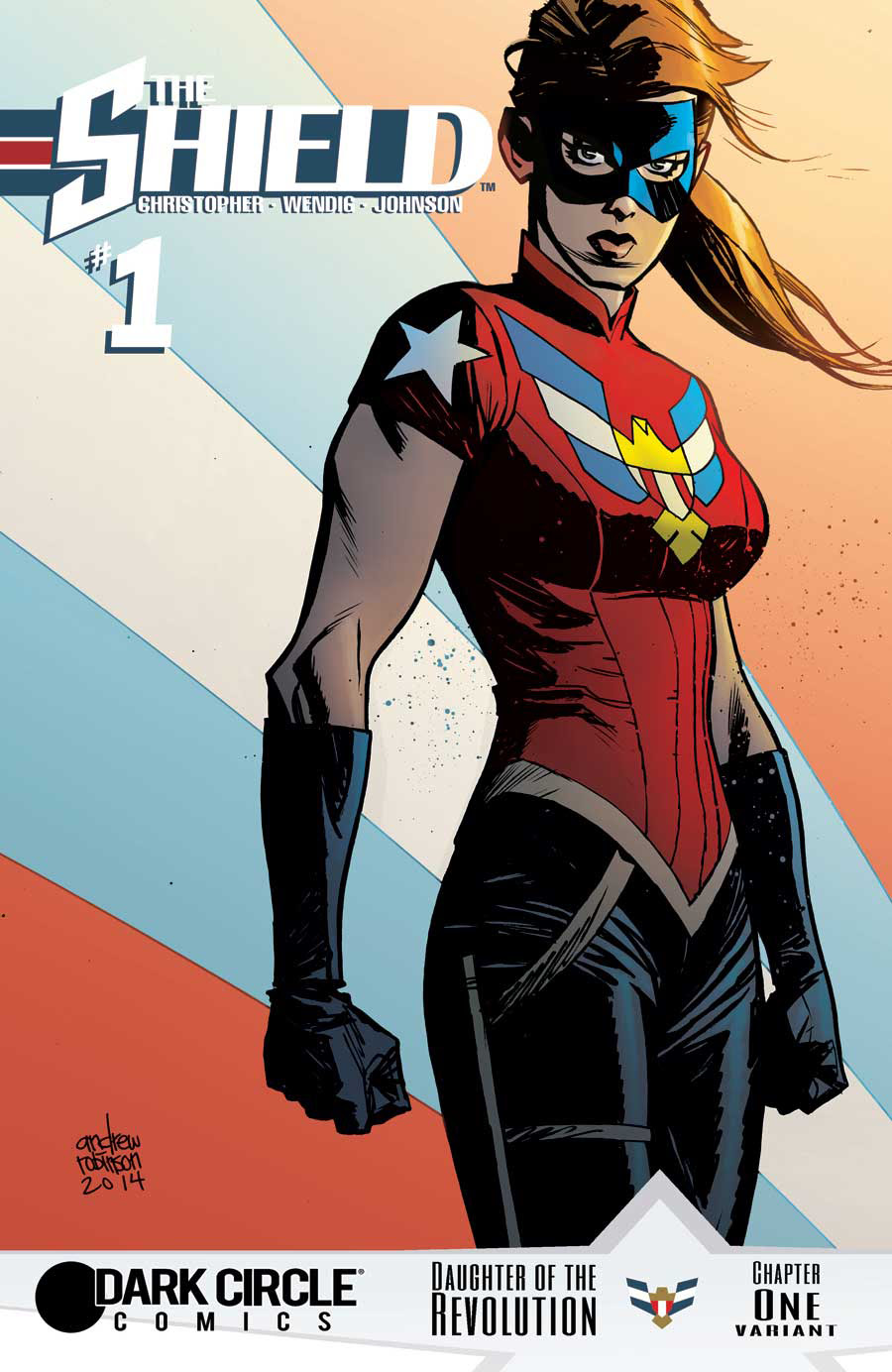 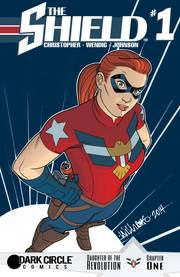 The third in the new Dark Circle line of comics which revives the old Archie heroes in a new way for the twenty-first century. The Shield is a creation that actually pre-dates Captain America, but never had the same success.

This time the Shield is a woman.

Promoted as the "spirit of the revolution" (the American one that is) the Shield appears with no memory of who she is according to the solicitation as she heads off to fight an evil force.

Readers will be aware I have a soft spot for these Archie superheroes so I hope this and the other Dark Circle revivals work out!

A hundred years since the Armenian Genocide Devils Due publish an account of the man who assasinated the former leader of Turkey who gave the orders to murder a million and a half people.

This true story is reviewed over at my other blog, Howie's Corner

As usual all these can be ordered from your local comic shop (cut-off date 14/2/15). If you don't have one then try my local store: 30th Century Comics
Posted by Howard Fuller at 13:23 No comments:

Superman gets a new power and more twists in latest issue!

Superman is an iconic comic character with a plethora of superpowers. He can fly, has super strength,invulnerability, heat vision, x-ray vision, microscopic vision, super-vision, super hearing, super breath.... (I think that's the lot off the top of me head). Enough one would think.

But no, in this issue to save the Earth he develops another.

The latest issue of Superman is the final part  of The Men of Tomorrow story line. And a major battle it is. Ulysses home world in the fourth dimension has been destroyed. Not on purpose mind, but Ulysses blames Superman and Clark's in for the "fight of his life", or more precise "our lives".

As Ulysses uses his energy powers to trigger an Earthquake, Superman fires his heat vision like never before....

Then we see his new power, which is splendidly rendered by John Romita Jr's pencils.

There's more to come though as Batman recovers Clark and takes him back to the Batcave.

Revelations about the effects will "shock" readers as Alfred attempts to "Iron & clean" Superman's Kryptonian outfit will amuse.

And to top off the issue Jimmy Olsen does something drastic and Clark kent reveals his secret identity but to who.

You'll have to read and find out in this seminal over-sized issue of the "New 52" Superman.

Already on sale on e-bay in the USA I understand!

Posted by Howard Fuller at 12:13 No comments:

Judas Iscariot has been alive for over two thousand years and he's not very happy about it. In an attempt to find an end to his existence he visits the gnome-librarians who keep the stories of all written in the never ending library.

Turns out Judas is not the only Disciple that has become an immortal and one is in a very high position indeed.

In a story filled with theology, the story of the "lamb" and the "word" is turned on it's head as we learn the true nature of Judas, Jesus and Paul (Saul) who are central to this story.

Did I say James is a junkie?

Lots of twists and turns in a world where scripture is both real and fiction.

What was the true pre-ordained destiny of history's most infamous traitor. 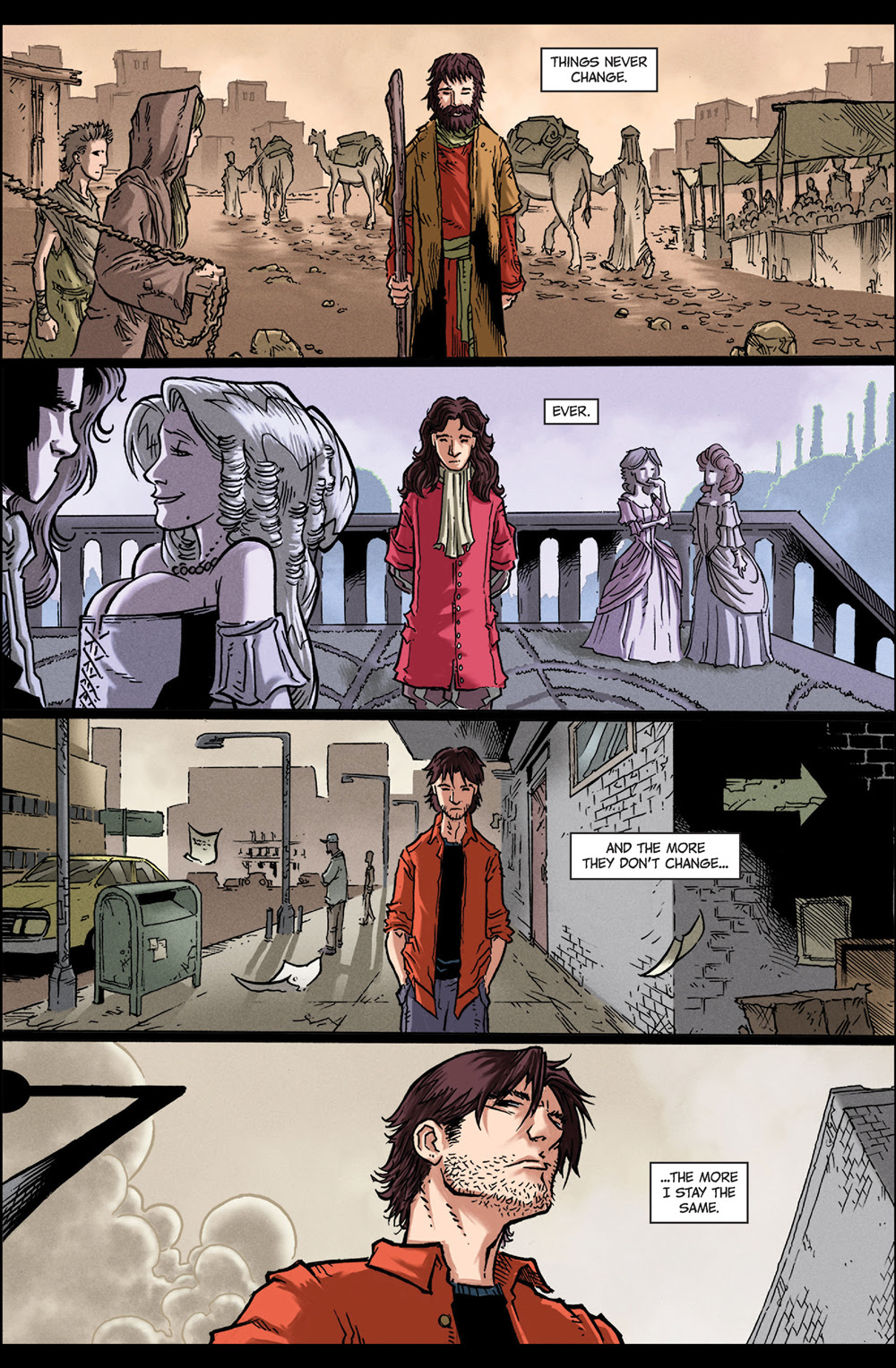 A graphic novel that will entertain, baffle and bemuse.

There was once an amazing man man who did amazing things. And then he stopped.

Read on.... Have tea with Jesus in the space between ideas at the table of elements.

Posted by Howard Fuller at 11:04 No comments: 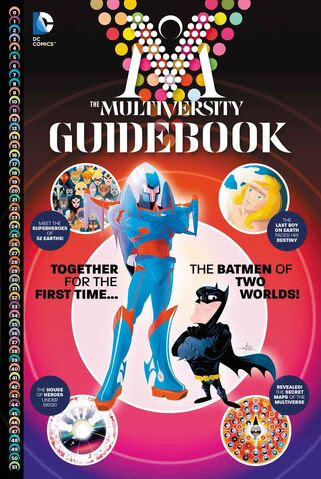 Everything you wanted to know about the DC Comics universe?

Well not quite, but this is a major appetiser!

For starters seven of the 52 Earth's remain secret, including the "most sinister one of all".

From the serious to the sublime this edition gives page upon page of information about the various worlds that form the ""New 52" and starts where we left off with a story involving the cabal of Dr Sivanas gathered from the Multiverse when they attack.. L'l Gotham and the cutest of all the Justice Leagues are massacred until enter ... the Batman.

Not one I'm familiar with but then he comes from a world of Atomic Knights, giant dalmatians and err.. Adam Strange?

But the highlight has to be the return of Kamandi! The last boy on earth from world not unlike Planet of the Apes but where all the animals seem to have become sentient. One of my favourite series from the 1970's.

Then there's the "real" "New Gods" rather than these neo-fascist ones that plagued the various Lantern Corps during the "Godhead" Story line.

Then there's news that Captain Carrots world  once destroyed but bounced back due to .. cartoon physics?

You couldn't make it up.

There's more to come as next month we visit the world where Superman works for the Nazi's and only Uncle Sam and the Freedom Fighters continue the struggle for freedom. 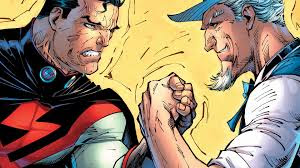 Did I mention the world where the Justice League are vampires?

This series is not to be missed.

There is a connection with Convergence I am sure.

Who's giant hand is that.

Have we not seen it before at the beginning of the universe. 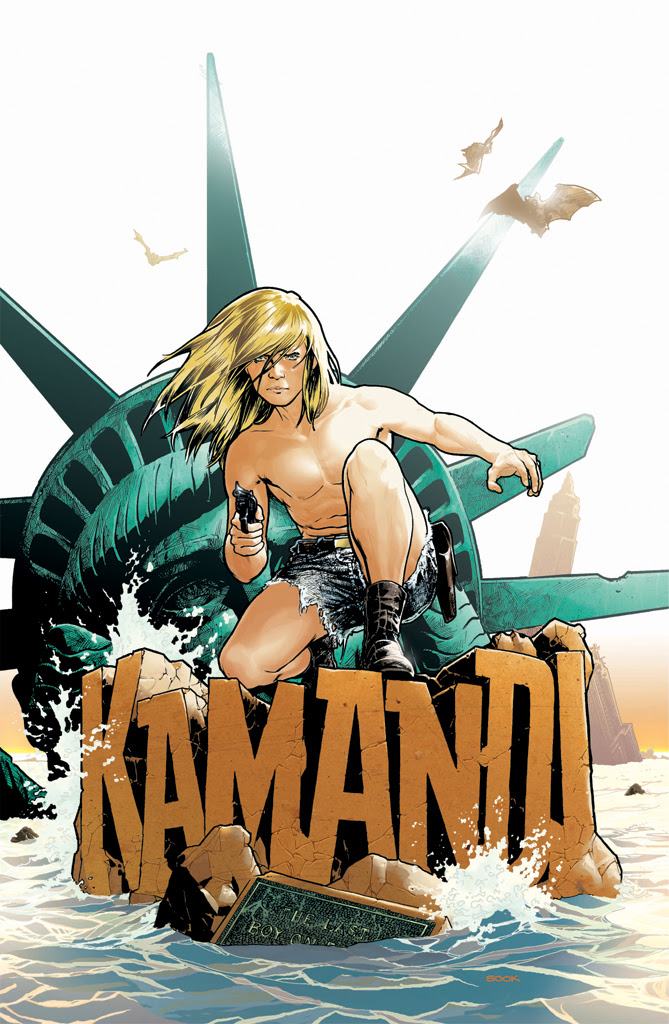 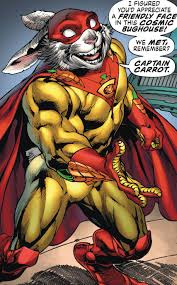 Posted by Howard Fuller at 14:02 No comments: