One of the most enigmatic of DC's comic characters has to be the Phantom Stranger. He appears from nowhere and comes and goes as he see's fit. More stealthy than the Batman and certainly more mysterious the Stranger had his own series which lasted from 1969 to 1976.

This issue is fairly typical with moody art from Jim Aparo who drew also created a similar aura for the Batman in Brave & the Bold. This tale, The Iron Messiah see's cybernreticist John Kweli return to his African homeland but survives the train crashing and is seemingly rescued by..a stranger.

On waking up in hospital he meets his old friend Ororo who brings the sad news that his father is dead. His village is in trouble and there there are soldiers arresting people in town plus a troublesome Witch doctor.

Unable to reach any agreement with the businessmen putting pressure on his people John decides to recreate the god the locals worship, Chuma.

Of course Chuma is a robot and a wee bit independent minded, even wanting to steal John's woman. In the end John dies at his creations hands getting shot in the back.

A very seventies short story. The robot of course gets his comeuppance, leaving the stranger to his musings on mankind's tampering with forces they do not understand.

The other new story is Satan's Sextet with Dr Thirteen another of DC's minor characters plus a visit from a stranger. A tale of murder and greed.

There are also a couple of old mystery tale reprints as this is one of those extra sized comics that DC ran for year but didn't catch on. One of these is a Mark Merlin story from House of Secrets in I Scout Earth's Strangest Secrets. An entertaining tale.

Fan Fact: Mark Merlin went on to become Prince Ra Man. Who you may ask? Check out old issues of House of Secrets!

Posted by Howard Fuller at 10:11 No comments:

The seventies were a great time for the fans of horror comics as every company was churning out titles particuarly DC.  One of my favourites was The Unexpected so when I get the opportunity and have a couple of spare quid I like to pick up a copy or two. In fact over the next couple of weeks there's quite a lot of DC horror to review.

Lets start with this bumper issue of The Unexpected, one of the 25 cent editions that DC published for around a year. This contains both new and reprint material starting off with Where Only The Dead Are Free in which a prisoner escapes into a forgotten valley where only a mad recluse and his brute of a manservant Munjo live. What is his secret and why would prison be better than staying here? Our villain is about to find out...

Next up is a tale of ghostly hauntings or so it would seem in The Vengeful Ghost of Glenville Gap in which Jud Harrow curses the two lawyers, Judge and Jury from his case as he heads to death row. There is however an Unexpected twist.

An old coin from ancient history comes with a surprise for whoever picks it up  as Johnathan Lathrop finds out in The Prisoner of Dead World, a reprint from an earlier issue. An ancient king is restored to life by the bearer but there is a price to pay as the finder becomes host for King Morandas. Quite "Unexpected".

Another reprint is The Haunted Violin featuring a musician who "cannot play a piece through without making a dozen mistakes" as a well known theatrical agent tells Drake. So off our protagonist goes to find a magic violin (as you do) and finds one in a cave somewhere in deepest Europe.

However the instrument comes with a warning which Drake ignores not exactly to his peril but does not achieve what he looks for and ends up back where he started.

They say save the best for last and that's certainly the case with the comics final story There's More Than One way To Get Framed which features a miserly old creep who allows his wife to live in abject poverty whilst he spends money on antiques. So little food she says not that Ivan O'Tolle cares..

Then one day he finds a magic candle that allows him to enter paintings. There he finds riches but before he can leave his wife aware of her husbands miserliness find his room empty and a candle burning for no reason. You can guess what happens next.

Oh and his missus sells off all these antiques to have a comfortable retirement. Good for her.

Seventies issues are always worth picking up.

Posted by Howard Fuller at 03:09 No comments:

The latest mini-series about the classic version of the cult TV show Battlestar Galactica hit the stores recently and a cracking story it's promising to be. In cutting time to escape the Cylons the tag tag fleet passes through Keiruian space despite their objections.

Cue the Cylons turning up on the Planet Keiru are not happy and decide to teach these people a lesson. One more genocide.

Cue Apollo he's found some friends, the Okaati a people also on the run from their enemies, the Comitat and by siding with them humanity has made a new enemy.

Enter Baltar and he invites the enemies of his enemies to join him in a final attack.

The scene is set. 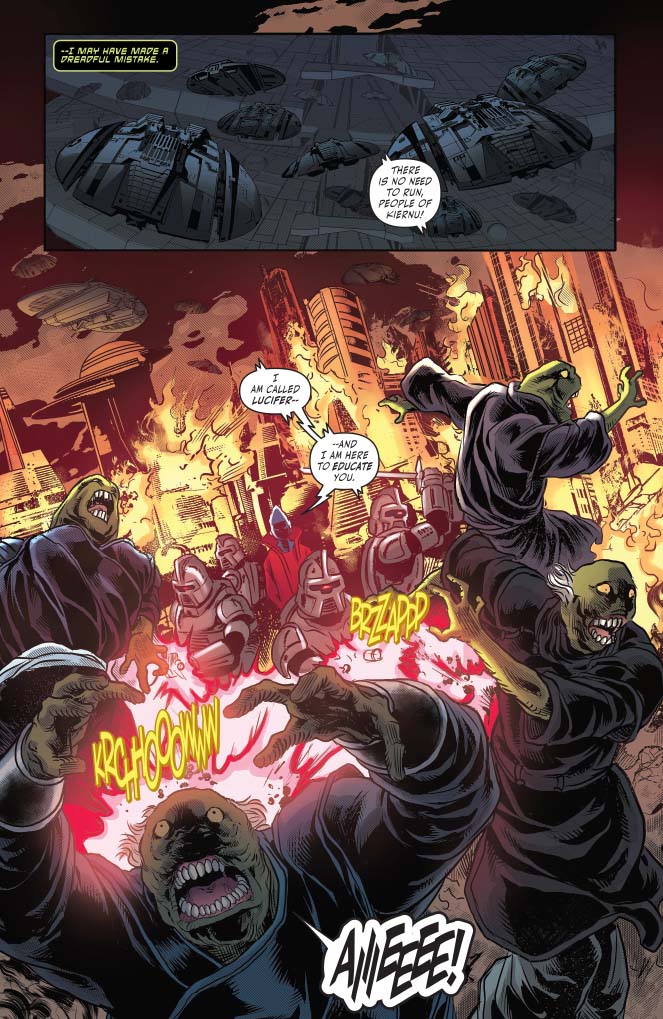 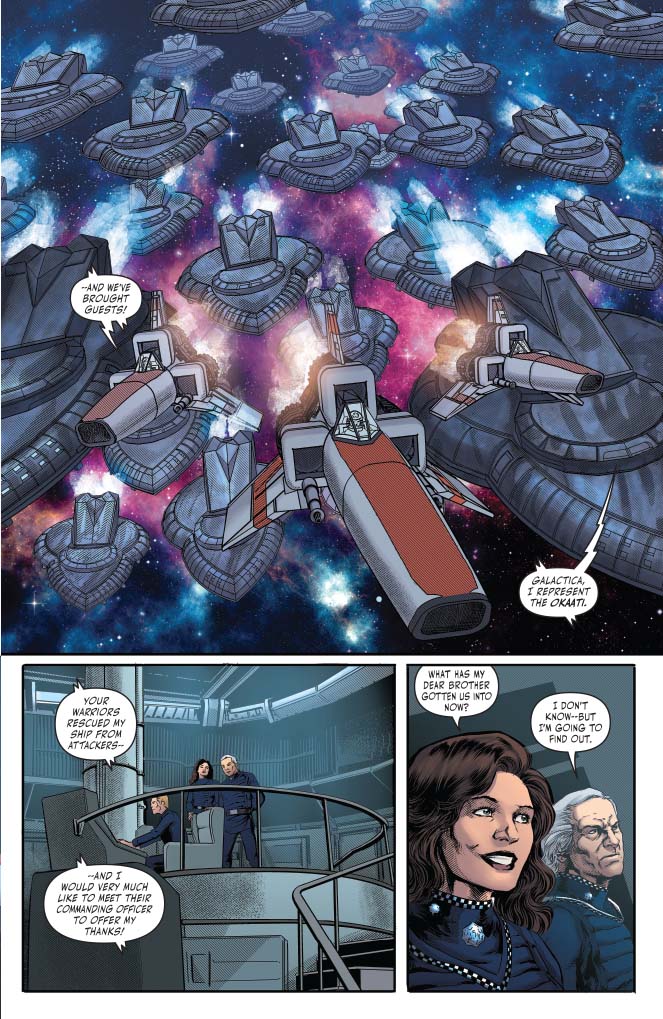 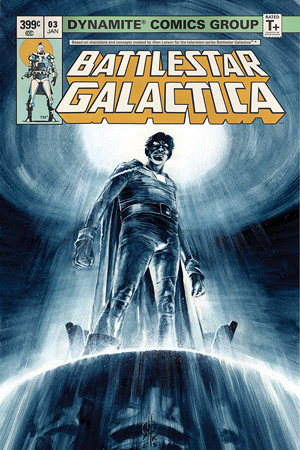 Posted by Howard Fuller at 11:44 No comments: 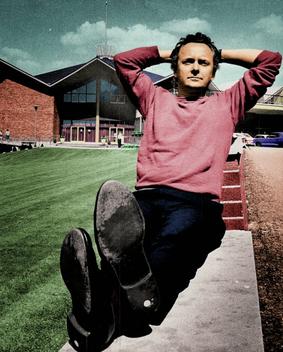 Photo: By Source Fair use

One of the most distinctive voices of cinema over the years was Douglas Rain who provided the vocals for HAL 9000 in the epic science fiction film 2001: A Space Odyssey, one of the greatest films ever made. Certainly one of my all time favourites.

Marvel Comics published an oversized, Treasury adaptation of the film which spawned a short lived series and led to the creation of yet another computer with feelings that remains part of the Marvel Universe today. Machine Man.

The Daily Telegraph reported that:

According to the sound engineers present Rain did the recordings with his bare feet resting on a pillow, in order to maintain the required tone - the "unctuous, patronising, neuter quality" Kubrick was looking for.

It seems fitting that his on screen performance of the "deactivating role" he played in the film which was described by critics " as one of the most harrowing on screen death scenes is shown below as a tribute to someone who in his native Canada was actually a Shakespearean actor. 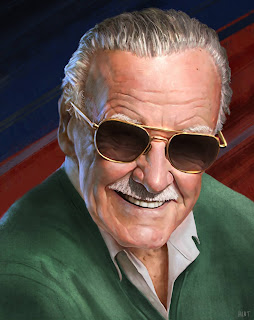 The creator of Marvel Comics, Stan Lee passed away yesterday at the grand age of 95. It's a sign of the impact that Stan had that his passing attracted so much attention across mainstream media.

Besides making Marvel Comics the premier comics publishing company in the United States, his characters have captured the public imagination since the sixties through such titles as Spider-Man and The Fantastic Four and so many others including The Incredible Hulk, Thor, The Avengers, Doctor Strange, the Black Panther not forgetting the X-Men, Daredevil and the Silver Surfer.

A whole fictional universe in which all of his heroes co-existed. For the first time there was "continuity" within a publishers comics which along with making his character falwed with very human problems despite their superpowers changed the industry forever.

And so did it's fans. As the Marvel Universe became more complex, it's readers stayed loyal and grew up with these comics which meant comics had to grow up with us.

That is his legacy.

These are some of his creations:

There are so many more but this meme I found on a Facebook page sums up Stan's contribution to our entertainment. 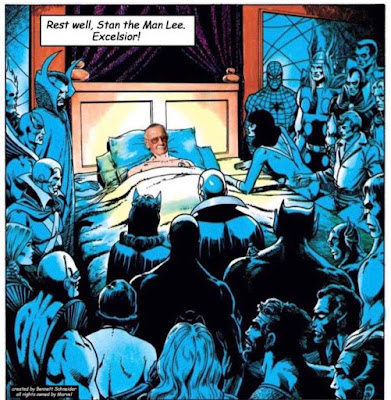 When I saw my local comic shop had this in I just had to buy it. This is one of those comics I knew I had as a child and although by then was more interested in Power Comics like Wham & Smash they never published Summer Specials, though Fantastic had one.

These are for me the "classic years" of The Beano which I had read on/off since before I can actually remember. These specials differed from IPC/Fleetway in that they were over-size and had a lot of colour. Other specials that came my way were Victor and the Dandy. Don't recall ever seeing a Hotspur one.

Still with Dennis the Menace, Lord Snooty, Little Plum, The Three Bears, Mini the Minx and the Bash Street Kids these were the fun characters my generation grew up with. Great to see and read once again, it's actually been a long time. I did pick up a Dandy Summer Special but even with the great Desperate Dan the Dandy always came second to the Beano in my eyes.

The Beano is still going though not quite the comic I remember. The Dandy went a few years ago but they still publish Summer Specials I believe, certainly annuals. If you see one of these golden oldies pick one up.

And remember Dad had a slipper in those days, though some us got a "thick ear". Well we all misbehaved sometimes didn't we?

Posted by Howard Fuller at 06:45 No comments: