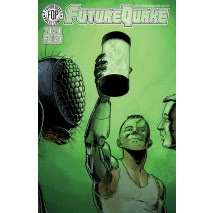 With no new comics being published or distributed by Diamond during the pandemic I decided to look at the small press for alternative entertainment and purchased a number of comics from FutureQuake Press which I'll be looking at this month.

This particular comic is a prestige format black & white science fiction anthology and frankly good value for the entertainment it provided. Like all such collections of short stories some stand out and one or two, well don't. It's the nature of the beast as they say.

There are no less than 23 stories in this comic starting with How to Get Ahead in Bounty Hunting by Ed Whiting with art from Andy Lambert which sets the tone for this volume. Good story & art. This is followed by  the amusing if horrifying Twenty Light Years or Less from Mike Lynch (w) and Tom Bonin (a).

The rest are a mixed bag which will appeal to some and not to others. Overall a comic I would certainly recommend.

Can be purchased from:www.futurequake.co.uk
Posted by Howard Fuller at 09:21