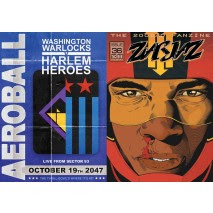 This is a small press fanzine devoted to  2000AD which remains Britain's premier comic with Judge Dredd amongst it's more famous characters. Like all fanzines this is a non-profit magazine published for the hell of it by fans for fans and probably to the amusement of the creators.

As expected the main features revolve around the world of Judge Dredd and are frankly well produced both in terms of writing and art.

First up is Back Again - For the First Time by Daniel Whiston with art from Andy Richmond which sees the Judges face up to Judge Death & Co who arrive from an alternate Universe.  This is followed by a tale of the Harlem Heroes which is written as a prequel by John Farrely. Not a favourite strip of mine but I know the players do have a following amongst 2000AD readers.

An amusing short story in the tradition of Tharg's shockers comes in Savage: A Grave Result  by David Fenn & Barry Renshaw. I liked this one. Weird!  Judge Dredd  himself appears in a two-page story  Joe By Any Other Name from Alan Holoway & Ian Beadle.

The Ace Truckers return in a nice little story The Boppo Job. Always like the madness in this strip back in the early days of 2000AD. Last but by no means least is Judge Purger by Mike Kalin & Dave Peloe.

This fanzine was a jy to read. I'm not sure how often it comes out but there are still some back issues avaiable which I may get round to buying  but this issue is available directly from the publishers: