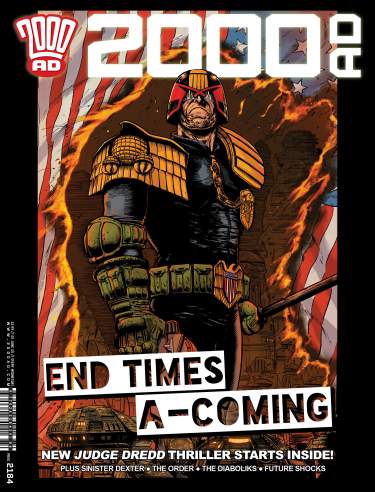 Following last weeks Mega sized edition for "younger" readers 2000AD returns to "normality" with a new issue featuring four new on-going stories plus a one-off Future Shocks.
As usual the action kicks off with the comics Flagship character Judge Dredd in End of Days which shows promise and involves everybody's favourite companion Judge Anderson. A visitor comes to Mega City One. Why and what message does he bring?

Next up our resident assassins Sinister/Dexter return in yet another mission Bulletopia but have they walked into something they can't get out of? Nah but looks fun!

The Order is the next new feature and appears to be some kind of historical/fantasy mash-up in Land Of The Free. Can't say i have a clue what's going on but there is a mystery to be solved by jove!"

There's also a great Future Shocks complete story, A Journey to the Edge of the Earth. Is there really a conspiracy to prevent us learning the world is flat? Or is there something more sinister. Trouble is there are wackos who believe this shit never mind the science fiction.
Finally there's The Diaboliks. Magic, demons and killers. Throw in a casino and you have an adventure to savour!

Frankly the best "jump-on" prog for a while and if you haven't picked up a copy in ages now is the time to start!