The 1970's saw all sorts of titles tried out by Marvel, mainly horror as the Comics Code (now thankfully deceased) relaxed it's rules. Bloodstone was one of these, more adventure than superhero and frankly the sort of fare that British readers would have been used to.

The first two issues of Marvel Presents were devoted to introducing a man called Bloodstone who seemingly appears from nowhere in the Marvel Universe despite having been alive for some 10,000 years.

We learn that as a caveman our hero follows a hooded figure into a cavern where lo and behold there is technology and a bizarre alien with an unpronounceable name called Ullux'yl Kwan T'ae'sny who "welcomes" the curious human to his presence.

The aliens mission is to turn himself into a "God" and tries using the man that we know as Bloodstone and his tribe to reach that goal. He fails and the tribe get wiped out except for one man. You can guess who that was.

In the ensuing fight a gem used for the ceremony is destroyed and a piece ends up buried in Bloodstones chest. He becomes immortal and powerful and so an ageless battle begins.

In a way this reminds me of the long running Kelly's Eye in Valiant, though the British story has no aliens. 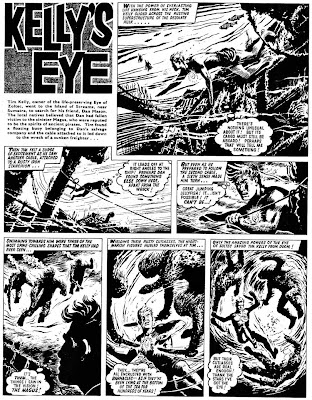 For some reason Marvel changed the stars of Marvel Presents from #3 to the original Guardians of the Galaxy. Bloodstone's story does not end there but he does end up up one of the more obscure characters in the MU.

An inexpensive couple of issues to collect and there is at least one more mini series to collect that is buried somewhere in my collection. I'll dig it up at a later date and see what happens next. Damned if I can remember!