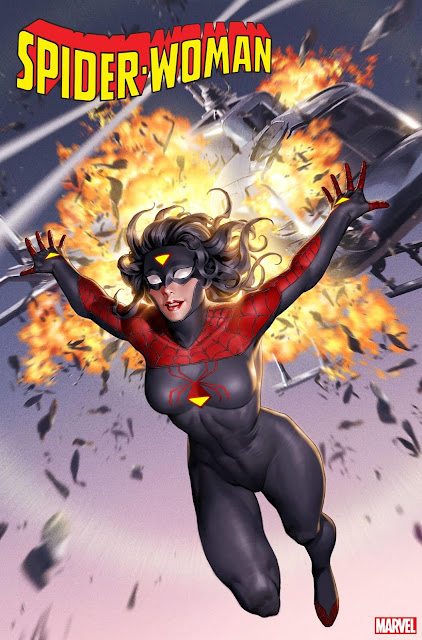 Other than the Fantastic Four it's been a while since I've dipped into much of the current Marvel Universe.  Back in the late seventies/early eighties I was a fan of Spider-Woman and enjoyed her original 50 issue series which is well worth picking up.

Spider-Woman also has a wee bit of a confused back story so Hydra, the High Evolutionary and her father all figured at some stage. Not quite as impossible to follow as Hawkman which changes all the time. Bendis didn't help much either with his"Ultimate" style story either.

The last time I read any Spider-Woman comics was a mini-series in the period not long before the Secret Invasion event which ended my faith in Marvel continuity. It turned out that Jessica Drew, the Spider-Woman had been a prisoner of the Skrulls for some years including this and other appearances. So what the %!*? had I been reading?

Other than Conan and the FF I still don't take much of an interest in Marvel but did decide to pick this up on a whim and I'm glad I did even if I didn't know she had a child or much else that was referred to in the story.

The first issue is an extra length introductory story (with a price tag to match) and is presented in two parts  the second giving the background as to why Jessica is where she is when the proverbial hits the fan and explains amongst other things the new costume.

It all takes place on a billionaires yacht at a children's party., but it's not the clown you have to look out for. Some amusing dialogue, great action and sets up a mystery that will unfold as the seines continues.