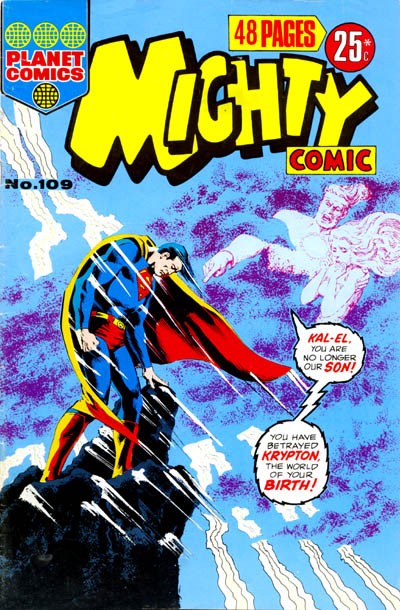 Printed in New Zealand, distributed in Australia back in the seventies this copy ended up in 30th Century Comics in Putney and hence the first Aussie comic in my collection. I was looking for something "different" when I picked this up. I have no knowledge about Australian titles, but given the cover and that I'm a big DC fan I thought I'd give it a try.

These remind me of Alan Class comics published over here in the UK. Undated and seemingly random content (I'd need to pick up a few more to confirm that) these are all DC reprints.

This issue contains four stories The Man Who Betrayed Krypton with Superman taking on The Crime Syndicate and their super-weapons. A "golden age" story featuring The Kid Commandos, A short "mystery" tale from one of DC's many such titles and Jimmy Olsen in The Strange Second Life of Jimmy Olsen.

There's not much about these comics on the Internet but these were started by KG Murray publishing and taken over by Australian Consolidated Press in 1973, so #109 pre-dates this. Published bimonthly and then thrice yearly this title appears to have lasted 126 issues according to the National Australian Library.

I would love to hear from an Australian fan with more knowledge than I about these fun black & white reprints. I am inclined to pick up a few more.