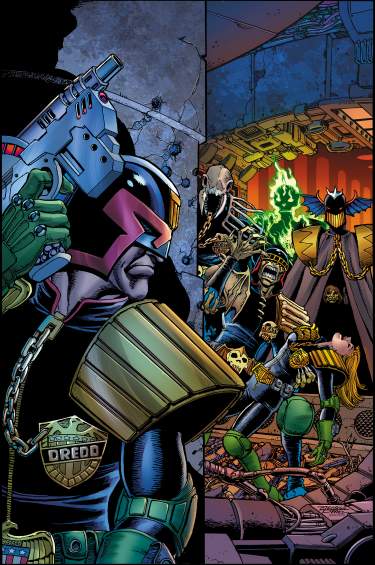 After a long stay in hospital and becoming housebound meant that regular weekly trips to the nearest W H Smiths was no longer possible so I've missed out on a lot of issues. Then I noticed that both the monthly Judge Dredd Megazine and the weekly 2000AD comics were jointly reaching "Jump on board" issues so off I went and took out a joint subscription. Heck they even sent me a set of 4 2000AD badges as a free gift!

The other advantage of being a subscriber is that I get sent the comic well before it gets to the newsagents on Wednesdays. Mine arrived Saturday morning in the post! And a cracking read it was too!!

This extra large edition contains 5 on-going stories and two complete short ones in a 48 page special.

Judge Dredd leads the pack with The Small House a 10 part story no-less which promises to redefine the "Dreddverse" and is set in Sino City with an under-cover Judge tracking down an assassin. Adventure extraordinaire written by Rob Williams and art by the legendary Henry Flint.

Brink: High Society is next. A story set on one the habitats where mankind has retreated following the destruction of the Earths eco-sphere and where a cult of the void is making sacrifices to the emptiness of existence. Mad f*ckers as their victim screams. A detective story from the pen of Dan Abnet and the artwork of Inj  Culbard.

More Sci-Fi this time with a bounty hunter roles up in Skip Tracer:Legion by James Peaty and Colin Macneil. Problem is he gets his "man" (an alien actually) but returns to civvies only to be told his brother is dead. To be continued....

Judge Anderson appears in Death's Dark Angels a one off black & white story in which she is taken prisoner by worshippers of Judge Death in Billy Carter Block.

The second short story is a bizarre feature with Sinister Dexter in Tight Grouping. Think I missed something here. Regular readers may be able to fill me in. They return in a few weeks in issue #2109. Can't say I'm a big fan of these characters though.

Much more to my liking is a historical horror featuring the Fiends of the Eastern Front which I remember from earlier issues of 2000AD. The wolves are hungry in 1812 as French soldiers scavenge for food in Russian woods.

Finally Kingdom: Alpha and Omega finishes of this bumper issue with a scary sci-fi adventure set on a ruined world with genetic warfare meaning the results are evolving very quickly. 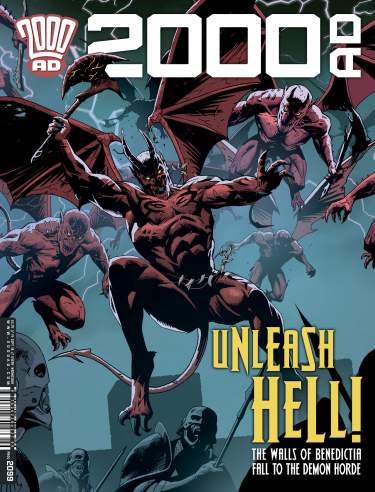 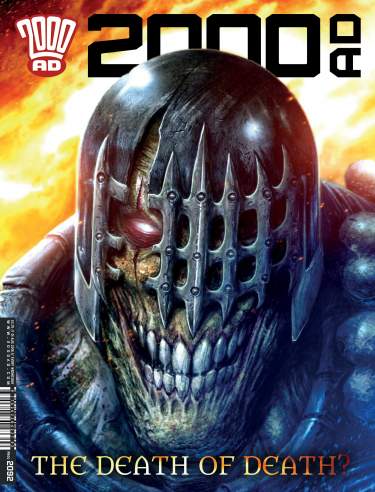 2000AD is available from all good newsagents or take out a subscription: