Comic Book Implosion: An Oral History of DC Comics circa 1976 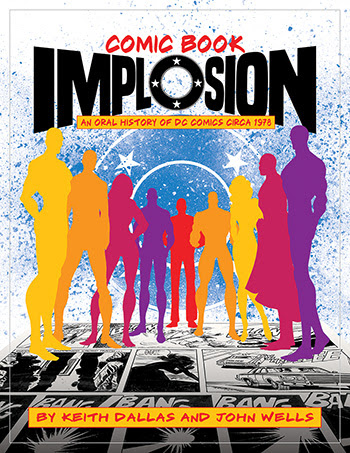 One of the most "infamous" events in comic book history finally gets the coverage it deserved. I recall several of the titles I purchased suddenly disappear after being promised a "DC Explosion" but given that Marvel also was shelving titles like there was no tomorrow the full extent of this did not get an explanation until some time later.

The seventies were a difficult period for comics though given the proliferation of titles that appeared even in UK newsagents didn't seem to indicate a problem. And yet there was.

By this time Charlton Comics had resorted to all-reprint issues which was pity as they had done a couple of good adventure titles like Doomsday+1 and E-Man. According to this tome Harvey Comics did the same though these were rarely seen where I lived and had no interest in anyway.

The big problem was sell through rates via news-stands in the states were becoming less profitable for both publisher and retailer. This resulted in problematic distribution with cases of comics never leaving distribution centres. The days of specialist comic shops had not yet arrived.

Two of my favourites of mine from this period are: Starfire (not the Titans character that came in The Titans) and Steve Ditko's Shade the Changing Man.

Other comics that disappeared during the "implosion" were:

There were due to be a whole range of other titles and Showcase was to revive The Creeper, but the story written by creator Steve Ditko didn't see light of day until the publication of a hardcover edition of the character a few years back.

A number of reprint titles never saw the light of day such as Demand Classics and Western Classics. New titles such as the The Vixen and The Deserter never got published except for copyright reasons in Cancelled Comic Cavalcade, of which only a couple of dozen photocopies were made and distributed to DC staff.

This book gives the full story with lots of information not just from DC staffers but Marvel as well. This was not a good period for them either as Marvel cancelled 19 titles during the same period. I collected Skull The Slayer which was eventually completed in Marvel Two-In-One.

A worthy volume for the DC fan and comic historian alike.