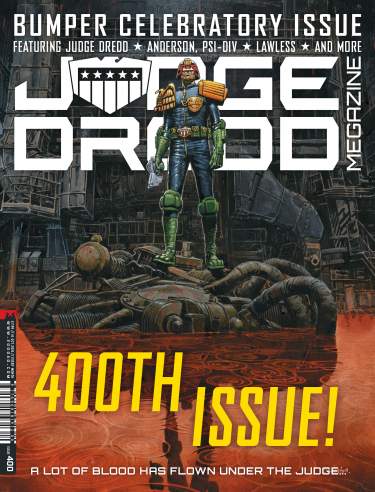 The 400th issue of Judge Dredd Megazine hit the newsagents this week with a bumper 100 page issue which makes a good jump on point for returning readers like myself or new readers if you haven't picked up a copy.

There's plenty to entertain with no less than seven stories inside. The first The Trouble With Harry is a hilarious take on what happened to the Royal Bloodline in Dredd's world. "Off with their heads" did you say? Brought to entertain you by John Wagner (w) with art from Henry Flint.

Next up is Lawless a black & white strip  from Dan Abnett (w) and Phil Winslade (a) set in the wild lands of the Dredd universe and sees the town of Badrock preparing for the worst in  Ashes to Ashes . Continued next issue...

Blunt II appears next, not a strip I am at all familiar with but tells the tale of a human and simian (?) settlement on an alien world under attack. Written by TC Edginton with art by Boo Cook it does look promising!

The second continuing feature is Storm Warning in a tale laden with ghosts but one isn't dead at all. What is going on in Over My Dead Body investigated by Psi-Judge Lilian Storm. No credits on this spooky tale.

Judge Death and his sidekicks are back in Dominion in a wicked tale entitled  The Torture Garden. Well what else would you expect. A horror story on an alien world brought to life by David Hine (w) and Nick Percival (a). A continuing adventure....

Finally everyone's favourite lady Judge appears in a story called Jordan Ramsey. In which Judge Anderson goes in search of a child's cry for help. A sad tale penned by Alan Clark with art from Inaki Miranda.

This is actually the fifth volume of the comic which adds up to 400. The first issue of this run is actually #201.

Order from your regular newsagent or take out a subscription: