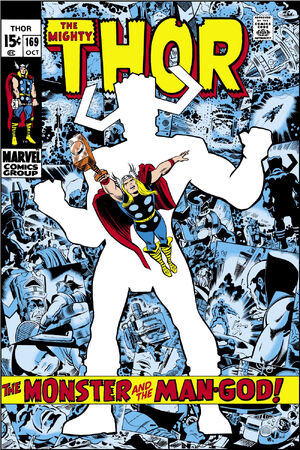 From the golden age of Marvel comics this spectacular issue of Thor penned by Stan "the man" Lee and drawn bu Jack "King" Kirby the two greats who created the basis upon which the fictional Marvel universe was built.

Combine this with Thor and the promise of the origin of Galactus the being that eats planets without getting indigestion and you have a winner.

The cover alone is worth the admission price and the story  not a bad effort at all even though the origin of Galactus goes on to be revised in future stories. In this version Galactus is the last survivor of the great paradise that existed on the planet Taa,  wiped out by an unstoppable space plague. He and others plunge themselves into the heart of the largest sun in the universe.

Somehow one astronaut survives as the ship crash lands and the Watcher complete with a vow not to interfere in the affairs of others allows Galactus to live.

And so the universe suffers as Galactus wakes with a mighty hunger only satisfies by consuming planets with life.
Posted by Howard Fuller at 07:38