Infinity Man and the Forever People: The final issue... 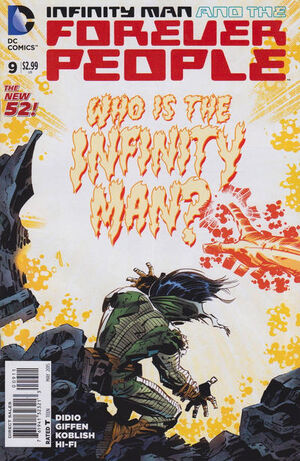 This is on of DC's least memorable series in their "New 52" Universe. In fact if it hadn't have ended with this issue I'd have cancelled my shop subscription. Sales have been very low (hence it's cancellation) and with this the third attempt to revive these creations of Jack Kirby has failed.

Originally part of the "Fourth World" saga that Kirby created for DC after his defection from Marvel back in early seventies, this always was the "weakest link". Other than another unmemorable 6 issue limited run back in 1988 this has been the only other attempt to breath life into these lacklustre characters.

However that said, the best (and I do mean the best) has been saved for last.

The last issue will have a very small print run so finding a copy might be a wee bit difficult. So I thought "what the hell" and will give the game away as so many of you will probably never get a chance to read it.

The story tells of the last days of the war with Apokolips on New Genesis, home of the New Gods. In a desperate suicide run Izaya (who will later become "Highfather") tries to deliver  a bomb in a desperate attempt to save his planet.

He fails of course.

Izaya reaches breaking point and flees to a remnant of the first "Source Wall" whose destruction led to the fall of the old gods.

In order to secure peace he must make a sacrifice. An exchange of children with Darkseid.

Here he is cleansed of his conscience in order that he might proceed with his ordained destiny.

They are both Izaya.